This course treats the language politics of Cyprus — a divided island since 1974, split by a UN buffer zone — as a way into broader discussions of borders, conflict, translation and intercultural communication.

Nicosia — Lefkosia in Greek, Lefkoşa in Turkish — is, as the triple name suggests, the site of intense linguistic as well as cultural interaction. It is the last divided city in the world: its old, walled city center is split roughly in half by a UN buffer zone that has been in place since the détente of 1974. It is both a post-conflict and a post-colonial city, with a past as a British Protectorate and with strong political and cultural ties to both Greece and Turkey. The languages of Nicosia, and of Cyprus more generally, are multiple and ever-shifting, from Greek and Turkish to Greek Cypriot and Turkish Cypriot — all of them also multiple and shifting even within themselves —to the many languages of third-country nationals living on the island, including UN personnel, economic migrants, refugees and foreign investors.

This e-Global Seminar treats the language politics of Cyprus as a way into discussions of borders, conflict, translation and intercultural communication more generally. Students will study literary, historical, anthropological, sociological, legal and other materials dealing with the island, its linguistic and social makeup, its present, and its past. In addition to critical readings in these fields, students will be introduced to numerous individuals living and working on the island, including writers, artists, anthropologists, politicians, activists and of course translators actively engaged in multicommunal efforts to forge connections and relationships across Cyprus’s many divides.

Emmerich and Nikolaou will teach the seminar remotely from Nicosia, conditions permitting. Via Zoom, they will lead the students through an introduction to the space, history, and personnel at the Association for Historical Dialogue and Research, which will be the seminar’s intellectual home base; a walking tour of walled Nicosia; interviews with residents in the enclave of Galinoproni/Kaleburnu; and filming in villages in the south abandoned by Cypriot communities in 1974.

Additionally, students will view a number of documentary films and explore material from the 2020 Buffer Fringe Performing Arts Festival, which is happening entirely online.

Daily instruction in Turkish or modern Greek will also be required.

This seminar fulfills the Social Analysis (SA) general requirement as well as a requirement for the certificates in Translation and Intercultural Communication and in Hellenic Studies.

“Conflict, Borders, Multilingualism, Translation” is co-sponsored by the Seeger Center for Hellenic Studies, with the support of the Paul Sarbanes ’54 Fund for Hellenism and Public Service and the Peter T. Kikis ’44 P83 Fund for Study and Research of Hellenic Studies. 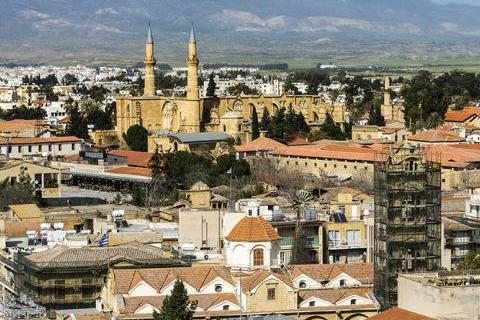